In October, Lucky Frog were in touch with JSCGI to help out on some tracks for the upcoming Simply Red Stars 25th Anniversary tour. In all we created 5 backdrops for the songs The Air That I Breathe, How Could I Fall, Ain't That A Lot Of Love, For Your Babies and If You Don't Know Me By Now. The first of these songs which is not from the Stars album was projected onto a gauze screen, while the rest were all shown on 6 square LED screens that could be moved vertically up and d

November 13th was time again for the Evening Standard Theatre Awards. Working with Shorty Productions, JSCGI created all the category graphics for this years event. Working closely with the set design we created clouds that were “dropped in” as though on pulleys at the Old Vic. This matched in with the proscenium that surrounded the stage. Using a very short throw lens we were able to project the image to disappear behind the proscenium. The star-studded event went viral with 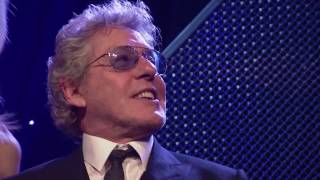 End of September saw JSCGI preparing for MITS and the 2016 recipient was the founding member of The Who and multi-generational cultural icon, Roger Daltrey CBE. This was also the 25th anniversary year, so JSCGI was ready to create various animations to be played throughout the night as well as working into the night to deliver a show edit that went live before the following morning. Once again Zafers created a great evening and helped to raise a huge sum of money for two grea